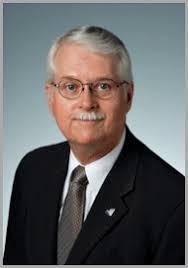 The Ethics of Intercultural Communication

Would you send your best female project manager to work in Saudi Arabia? Would you pay a requested grease payment to a foreign Olympics official if a new contract might prevent 300 workers from losing jobs at your company?

In their November 21 workshop presentation at Perkins in Winter Park, Dan Voss and Bethany Aguad led attendees through an ethical thicket and shared the cultural customs and ethical principles that must be weighed before the best approach is apparent.

No kidding, folks, this stuff is hard! 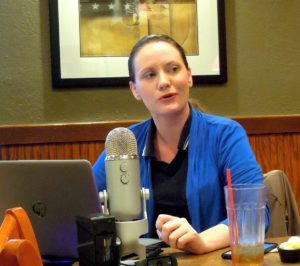 Dan and Bethany guided the discussion based on a hierarchical process model that gives different weights to the many considerations in each example. There’s a lot to consider, and even if you master the multiple levels of ethical considerations, it doesn’t mean the answer is ever obvious. The model was first intended to quantify the value analysis process by assigning numerical values to ethical values, arithmetically weighting them to allow for the interests of the various stakeholders (as well as their ability to influence the outcome), and using a formula to compute an “ethics quotient” in each case. It just can’t be done easily in real time. But our participant discussions led to good decisions.

We examined four workshop cases using six value models to identify the values and interests of the stakeholders and highlight which ones were in conflict. If you can find potential actions that resolve the conflict in favor of the higher or more central values, you can obtain the greatest good or do the least harm.

Except that there are more considerations to weigh. Another tier represents an intercultural “filter” that acknowledges cross-cultural differences in values and priorities. These are national, religious, and ethnic considerations. 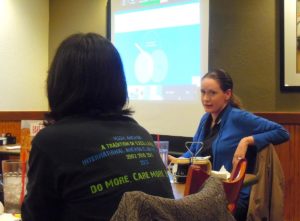 Bethany and Kathryn Ceballos discuss an ethical point during the workshop.

The final tier of filters projects the likely outcome for each alternative solution. As in physics, every action has an equal and opposite reaction, so every decision has less visible consequences. Sometimes choosing the highest or most central ethical values form a path that has severe negative consequences, just as the war graves in Arlington National Cemetery attest to the reality that “freedom isn’t free.” On the other hand, the fuzzier ethical path and slippery slope of situational ethics (making the rules up to serve personal interests) can be very tempting because it leads to positive personal outcomes rather than being penalized for doing what is right. 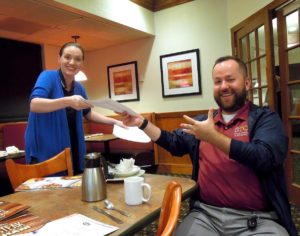 Alex Garcia was clearly eager for another ethics case during the workshop.

Somehow, between right and wrong lies a best option for the murky situations that lie in our professional path. If you attended the November workshop, you at least will be up the creek WITH a paddle. 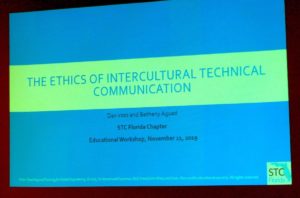