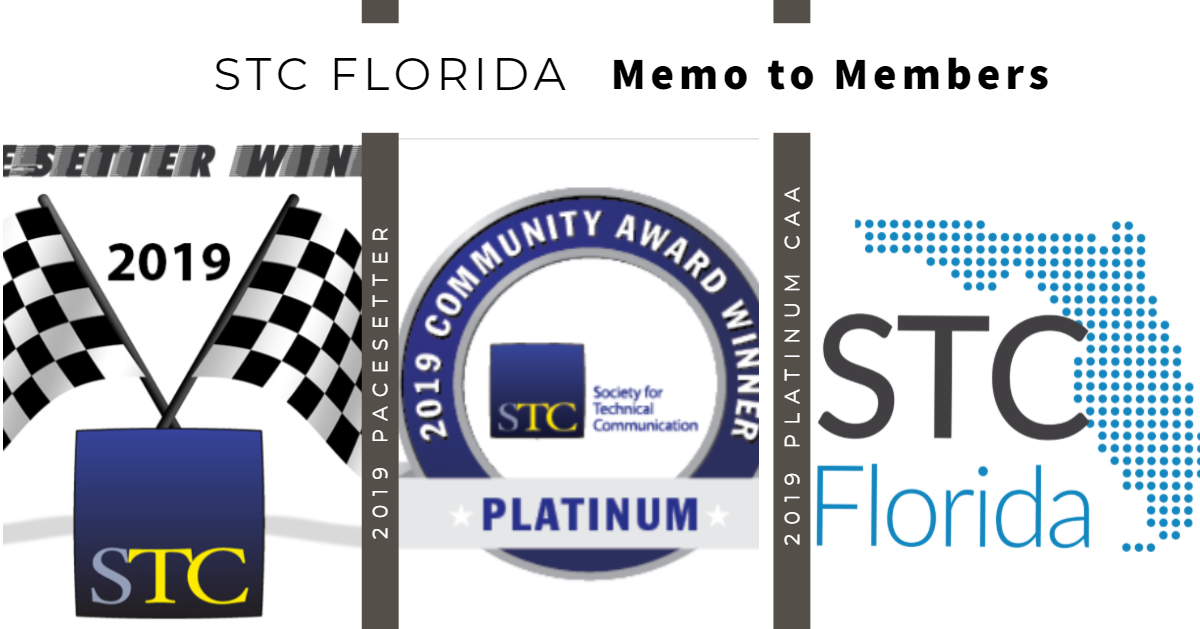 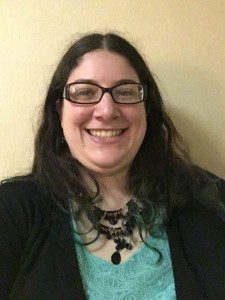 Technical Communicators of Florida and Beyond,

You may have noticed the new MtM banner at the beginning of this month’s newsletter. That’s because, after 4 years of abstaining from  STC’s annual Community Achievement Awards (CAA) evaluation, our chapter decided to jump back in and “Go for Gold.”

However, due to the hard work of numerous chapter members (especially the head of all the madness, Crystal Brezina), we surpassed our Gold goal and earned the highest award, the Platinum Award. Along with the Platinum award, we also received our chapter’s third Pacesetter Award for our innovative Leadership Development Program (LDP).

This monumental achievement is just one of the many achievements we plan to celebrate at this month’s meeting, our annual Spotlight Awards & Elections. Read on to learn more about the meeting, or visit our Meetup page.

Along with celebrating all our year-end achievements, I have another exciting development to share: a new column called Looking Back, Looking Forward by Chapter Historian/STC Fellow Mike Murray and STC Fellow Dan Voss! Read on to learn more about this new column in its inaugural article.

That’s all from me for now. I hope to see you at the meeting!

Catch you on the flip side,

This will be my final article for the 2018–2019 chapter year as the Florida Chapter’s Acting President (formerly our Vice President).

On Thursday, June 20th from 6:30 to 8:30 PM, STC Florida will host our annual awards ceremony. We will also hold our annual elections and install our new Administrative Council for 2019–2020. (Fun fact: I will literally be passing a gavel and giant hat to the new Chapter President!)

As with many of our initiatives this year—our first full term carrying the mantle of Florida Chapter—this ceremony will mark some notable firsts in STC Florida’s 41-year-long history: 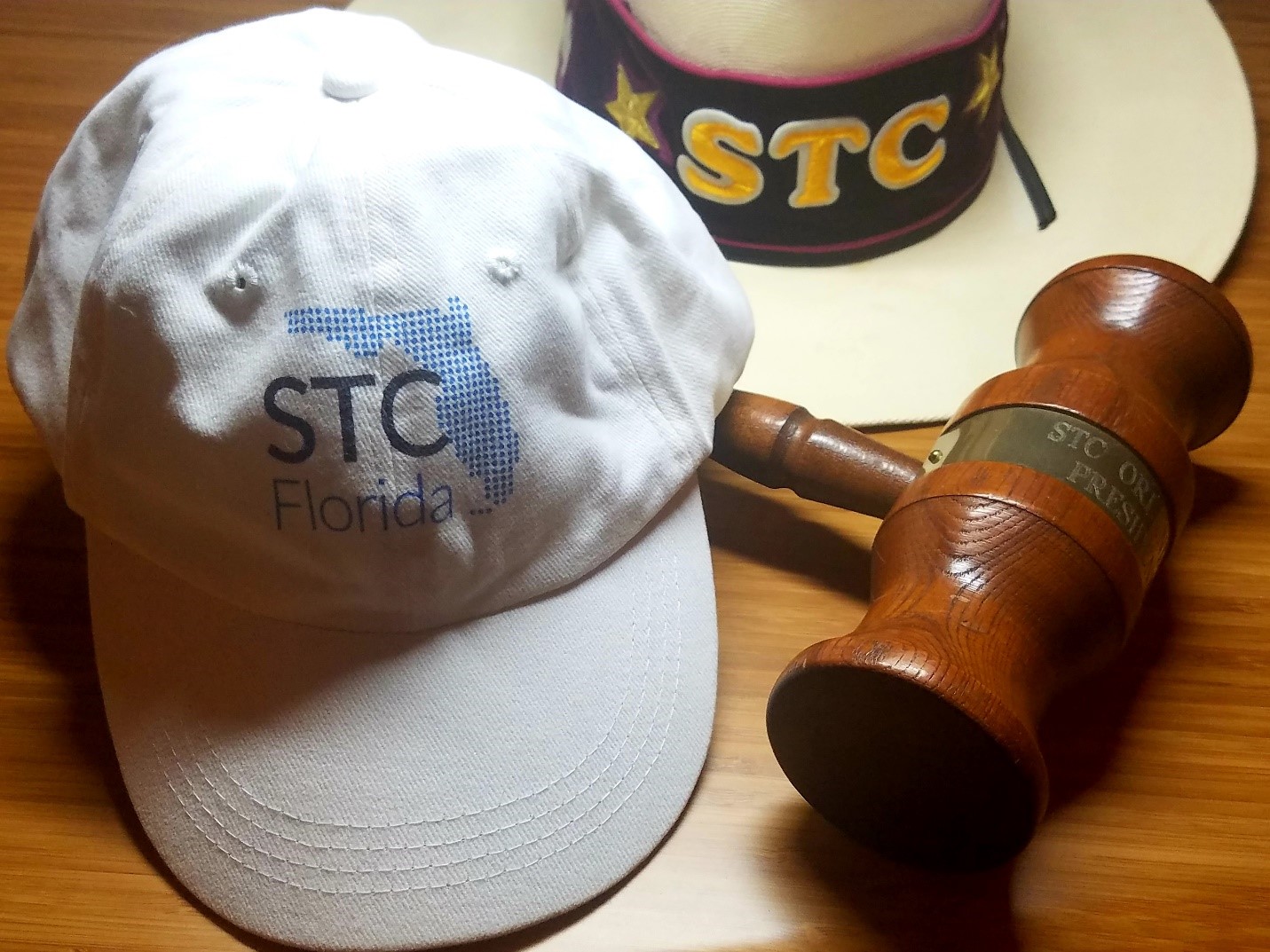 Naturally, STC Florida’s Annual Spotlight Awards & Elections is free to attend. We only ask that those attending in-person please purchase some food/beverages to support the restaurant that is hosting us. Guests are absolutely welcome; please include them in your RSVP count. I hope you can join us either virtually or in-person for this Thursday’s celebratory event—and perhaps win a chapter cap in the process!

Please RSVP here for the event! 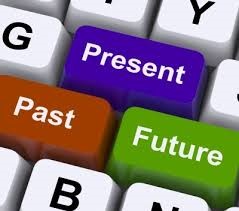 History has an uncanny way of repeating itself.

Welcome to Looking Back, Looking Forward, a new column that will appear periodically in Memo to Members. This column will showcase landmark articles and other documents generated by members of the STC Florida Chapter over our community’s storied 41-year history.

Fear not, younger members—this is not going to be an eye-glazingly soporific forced march down Nostalgia Lane by tribal elders pontificating from our creaking rocking chairs.

Quite the opposite, in fact.

As chapter historian, Mike Murray has been sifting through hundreds of documents and organizing them into a coherent archive of the chapter’s history. In the process, he has unearthed a treasure trove of materials that remain remarkably relevant today.

We plan to exhume some of these gems from the chapter crypt, dust off the cobwebs, and take another look at them decades later.

So here we go.

We are launching the new column with an article Mike wrote for Memo to Members back in 2003—the year our community won the first of what would be an unprecedented and never equaled nine Community of Distinction Awards in STC’s annual Community Achievement Awards (CAA) evaluation. The article is entitled “The Road to Distinction.”

What could possibly be more apropos as we celebrate the chapter’s first award in the Society’s new CAA structure, which replaces the historical Merit-Excellence-Distinction progression with a Bronze-Silver-Gold-Platinum sequence?

Having abstained from the CAA process for the past 4 years for reasons beyond our control that we will not go into here, in reentering it we were hoping to come home with a Gold Award—the equivalent of the nine Chapter of Distinction Awards we won in the past.

But no—we went straight to the top, landing the coveted, hard-to-achieve Platinum Award, which was presented to former chapter president, now STC Board of Director member, Bethany Aguad, at STC’s 66th annual International Conference (Summit) in Denver at Leadership Day on May 5.  On top of that, we also brought home our chapter’s third Pacesetter Award for our innovative Leadership Development Program (LDP) that grooms future chapter and Society leaders.

As you read “The Road to Distinction” from 2003, we believe you will be amazed at how easily this could be “The Path to Platinum.”

The key is an unflagging Commitment to Excellence that has characterized our STC community since its inception in 1978. Excellence is, and always has been, one of our chapter’s core values. It’s in our DNA.

So, we tribal elders who paved the Road to Distinction 16 years ago take off our hats to the young leaders who have carried on our community’s Commitment to Excellence on the Path to Platinum.

Without further ado, then, here is Mike Murray’s eerily familiar “The Road to Distinction,” freshly disinterred from the archival crypt.

We think you will agree—in this case history has, indeed, repeated itself!