The skills Technical Communicators use in their profession make them excellent Dungeons and Dragons players, as well as game runners (a.k.a “Dungeon Masters”). From writing to collaboration, the core skills that lead to success on the job can be developed and honed in this fun, fantasy setting. While fighting evil monsters as an Elven fighter might not seem to relate to work in Information Technology, both challenges require thoughtful communication, working with a team, doing research, and applying critical thinking skills.

What is Dungeons and Dragons (D&D)?

Dungeons and Dragons is a fantasy role-playing game that got its start in 1974 and is often abbreviated to DnD or D&D — we will be using D&D here. Each player creates a character that they will play as during the game. The players then act out scenarios as their character, like actors in a play. However, unlike in a play, there is no script or stage. The script is improvised, and the acting takes place in the imagination. Actions are spoken such as: “I look around the cave, searching for the monster said to live there.”

The straightforward way to explain D&D is by saying it’s play-pretend for all ages. Games can focus on exploring a fantasy world, combat in a fantasy world, the interactions between characters, or some combination of the three. If you want to learn more, here’s a 5-minute video explanation from The Dungeoncast on YouTube.

Role of the Dungeon Master

The world of the game is created and run by the Dungeon Master (DM) or Gamemaster (GM). While each player is responsible for playing a single character in the game, the DM runs the entire game world, everything from describing scenery to playing the Non-Playable Characters (NPCs) that their characters meet.

Below is my character sheet from the first game I played as Linea Faenane, the High Elf Wizard, and her “familiar” (a magical animal companion), Lunara the cat. 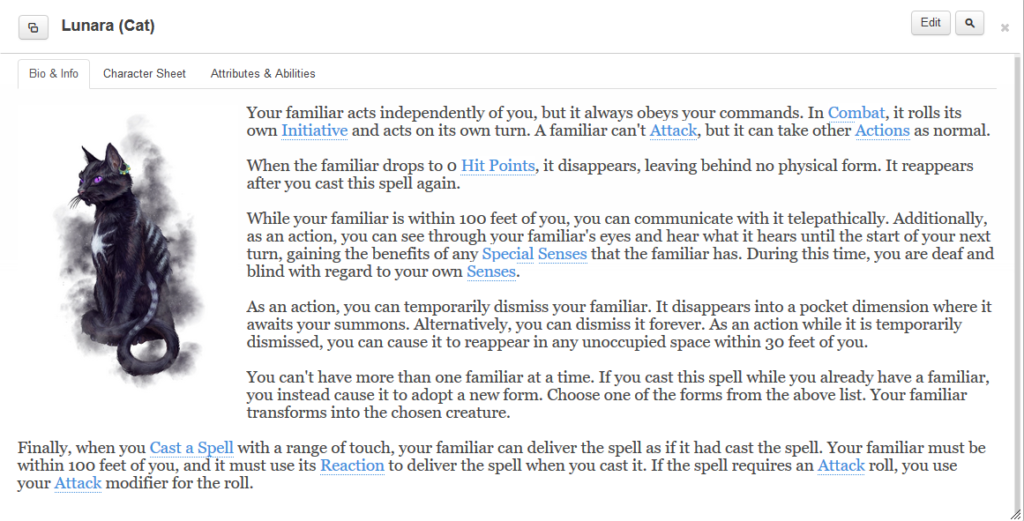 Based on a combination of the number on the die, the character’s skills, and the difficulty of the action, the DM will describe the outcome.

To start learning to play the game, the best thing you can do is to watch others play (in person or online), to or jump in and start playing.

In my first session, we had mostly new players with some more experienced players, so we started by introducing ourselves. We then went over how to use Roll20.net, which makes it possible to play D&D online. Our next step was to create our characters and their backstories. Once our characters were created, we introduced our characters to the other players and told their backstories. The final two steps were to learn the scenario we would be playing and then to play it (while taking any necessary snack or bathroom breaks).

How does this relate to Tech Comm?

Technical communicators possess skills that apply to playing and running a game of Dungeons and Dragons. For instance, running an entire D&D adventure across multiple sessions requires project management skills. While the game itself is played for fun, a good DM must manage scheduling and storylines, tracking the players’ progress through the story and noting key milestones.

The table below illustrates the correlation I identified between skills many technical communicators use on the job and the tasks in D&D that applies those skills.

Most veteran DMs spend time preparing before a session with their players. They create descriptions for the world the players will explore. Drafting these descriptions is an exercise in creativity, but also in conservation of detail.

In our game, Bethany as the DM provided the scenario. Our characters were a group of acolytes who had left our temple to go work for the Harpers, an organization that seeks to do good while working in the shadows of the port city of Waterdeep. Our Harper contact, Renaer, would assign us jobs, and in exchange for efficient, speedy work, our characters would receive handsome compensation.

At the start of the adventure, he provided the details on our latest job:

Uza Solizeph is an old woman who sells books out of her small shop in the Trades Ward of the vast city of Waterdeep. She claims to have trapped a monster in her shop and fears for the welfare of her books and her cat. The City Watch isn’t likely to lend a hand, given Uza’s propensity for tall tales, but the Harpers owe her a favor. You’ll find her sobbing at the tavern on the corner of Sort Street and Salabar Street. Make haste!

Like technical writing, you give your players the information they need to complete their task, without overloading them with unnecessary or distracting details.

In D&D, you often engage with characters who provide crucial information to aid your player characters on their quest.

We received our assignment and went to the tavern to interview Uza. We listened carefully to her story and asked questions like: “Did you see the monster clearly?” “Can you describe it?” “What does your cat look like, and what’s your cat’s name?” “Can you describe the interior of your shop for us, please?” These questions were designed to help us gain an understanding of what we were up against.

While we were talking, a bard recognized a member of our group as the person who previously swindled them and tried to pick a fight. Our bard convinced them to back down using superior barding skills, and the other bard moved on. Once we established all necessary details, we asked Uza to take us to her store and to wait outside it for us while we took care of the monster and found her cat.

Gathering information on the job often presents challenges for technical communicators. While a SME can become your greatest ally in learning the product you need to document, determining what questions to ask can be tricky.

Dungeons and dragons gameplay provides a series of challenges for the players to overcome. While some players may expect to resolve conflicts with combat, many obstacles can be resolved with creative problem-solving.

We went into her shop. Linea asked Lunara telepathically to look for Uza’s cat and let her know if she finds the cat. The group started looking for the cat and the monster. While exploring the shelves looking for clues, the group noticed some scorch marks and identified some books about monsters. The monster found us, so we rolled for initiative (turn order) and started fighting the monster.

During the fight, Lunara concentrated on staying out of the fight and kept searching for Uza’s cat. Lunara found Uza’s cat towards the end of the fight and worked on calming her. We defeated the monster and Linea used a spell to identify how the monster arrived in the shop — it was through an enchanted book about the monster. There were two similar books that could summon other monsters. One of us called Uza in, and Linea explained her findings and asked if they could take the other two books to turn in to the Harpers. Uza agreed and thanked the group for their help.

By nature, all tabletop roleplaying is collaborative. The game and story evolve through the input of the DM and the players, with dice rolls determining how things play out. As a party, the players each contribute their ideas to influence the direction for every scene.

As technical communicators, collaboration drives our work. Even solo writers must learn to work with subject matters experts and consider the response of stakeholders in developing documentation.

Why Should You Play Dungeons and Dragons?

As technical communicators, our skills make us the ideal party members, both in Dungeons and Dragons and on the job. We shine in a collaborative environment where our work can enhance the effectiveness of those around us. With that in mind, why should you give a tabletop game like Dungeons and Dragons a try?

Second, you can practice many technical communication skills in the creative safe space of a tabletop role-playing campaign. While the decisions in the game do not have real world consequences, the DM and the narrative still define the stakes. Telling a story in a game provides you a chance to hone your skills, such as telling stories through your documentation to your users.

Why not give it a try?