Our long-time chapter leader Mike Murray has been the inspiration for a brand-new graduate scholarship at UCF, which was announced this month. It has been his dream to Make a Difference in the lives of people who live with disabilities and other health challenges, and it is his hope that this scholarship will support students whose careers will place them on the front lines in patient care and the development of best practices.

The scholarship fund is accepting contributions (see the end of the article), for those who wish to support this worthy endeavor and honor our friend and colleague Mike in the process.

UCF School of Communication Sciences and Disorders to Benefit

Published on the UCF Website and Via Social Media, November 8, 2019

Link to Online Publication at UCF

Mike Murray (a.k.a. “Da Voice”) of Orlando, an ardent UCF supporter and an expert communicator, is the inspiration for the newest scholarship for graduate students in UCF’s School of Communication Sciences and Disorders. Murray has made a huge difference in the Central Florida community over the past 30 years through his communications expertise, leadership, and countless volunteer activities.

Fueled by a start-up donation from three of Murray’s long-time friends and colleagues in the Society for Technical Communication (STC)—Jon Kessler, Karen Lane, and Dan Voss—the Mike Murray Make a Difference Scholarship will open for applications in February 2020. The award will be disbursed next fall and annually thereafter.

Why the School of Communication Sciences and Disorders? It’s a Long Story. 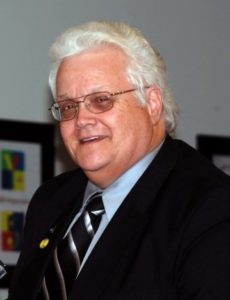 Murray is a remarkable leader with a unique ability to build and sustain an organization. Through both his professional career, including 10½ years in the U.S. Air Force and 31 years with Lockheed Martin, and his service to the community through Cub Scouts, Little League, youth football and basketball, and Special Olympics bowling, Murray helped unify organizations and inspire their members to reach new heights of achievement.

His iconic role as “Da Voice” in his service as a sports announcer for Dr. Phillips High School football and basketball as well as Rollins College women’s volleyball was the perfect personification of his core belief: use your voice to inspire the best in others.

Karen Lane, one of the founding donors to the scholarship, expressed, “Mike’s super power is his ability to identify people who can make a real difference and empower them to do so. This scholarship will carry Mike’s vision forward as his permanent legacy at UCF and beyond.”

Murray has been battling Parkinson’s Disease since 2008. He has refused to yield to the limitations this progressive disease imposes, yet, ironically, the first thing to go was his booming announcer’s voice.

Instead of quitting when his voice was taken away, Murray reached out to others with disabilities. He used one of his other gifts—his superb writing ability—to share his personal experiences and send a compelling message: focus on abilities rather than disabilities.

Murray has dedicated the last 15 years of his life to reaching out to people with disabilities and debilitating illnesses, including those who have “lost their voice”—often quite literally—due to aphasia, speech pathology, deafness, cognitive limitations or progressive disease processes and those with other life-limiting disabilities including blindness and mobility restrictions.

As a 30-year member and Fellow in the Society for Technical Communication (STC) and a charter member of its AccessAbility Special Interest Group (SIG), Murray used his eloquent writing style to drive home the message that people are defined by their abilities, not their disabilities. This is evident in his landmark article as editor of the AccessAbility SIG Newsletter Achieve! titled “The Elephant in the Room.”

In this article, Murray addresses the awkwardness people typically experience when meeting a person with noticeable disabilities. As he said, “With my distorted facial appearance (the ‘Parkinson’s Mask’), I became the ‘elephant in the room.’ Nobody was comfortable with me.” Murray’s closing advice on how to deal with “elephants in the room” is inspiring:

As the debilitating illness slowly erodes Murray’s physical and cognitive capabilities, he focuses not on what he cannot do but on what he can. “What I tell other people in my situation is to place their finger on their wrist. I tell them if they feel a pulse, they still have work to do.”

And that is precisely what Murray continues to do. Knowing his time may be shorter due to the Parkinson’s, he wants to continue “Making a Difference” through this new UCF scholarship, even after his death.

“Mike makes things happen,” Lane said, “and his commitment to excellence is infectious.”

Scholarship co-founder Jon Kessler also spoke to this point: “As president of the Orlando Chapter of STC, Mike used the full force of his personality to transform a previously stagnant and unmotivated group into an internationally recognized center of excellence in the communication profession.”

Murray is a personal leader as well as an organizational leader. He has served as a mentor in the STC Florida Chapter’s flourishing mentoring program for technical communication students at UCF since its inception in 2003. In 2018, he founded the leadership development program Pass the Torch, which has inspired up-and-coming leaders, both within STC and in their professional roles.

Scholarship co-founder Dan Voss said Murray is always focused on impact. “Mike has always measured success by results, not intentions. Now, by establishing this scholarship, he has passed his torch to UCF’s School of Communication Sciences and Disorders. He is confident scholarship recipients will carry on his mission of helping others by ‘Making a Difference’—now and long after he’s gone.”

A single guiding philosophy will govern the selection of the annual scholarship recipient: which candidate is most likely to make the greatest difference in the practice of his or her chosen field and in the lives of the patients being served. Guided by information provided by the student applicants as well as their performance in the classroom and in the field, the faculty selection committee will determine who best carries forward Mike’s commitment to making a difference in the world.

Contributions to the Mike Murray Make a Difference Scholarship Fund can be made via check to the UCF Foundation at 12424 Research Parkway, Orlando, FL 32826 or via credit card at ucffoundation.org/MikeMurray.