Career Tips from a Veteran 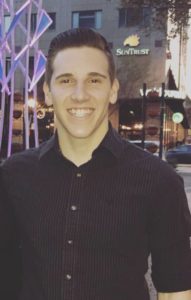 “Would you hire this guy?” W.C. Wiese asked the table, referring to a picture of himself as a young man. The table laughed, understanding that the young man in the picture would soon spend a successful 45 years in the Technical Communication field.

W.C. Wiese began his presentation by explaining the origins of his career. He started at Lockheed Martin (Martin Marietta, as it was called at the time) writing technical manuals and proposals. Writing departments were made up of dozens of people, and the publishing process was just as complicated as the writing itself. W.C. explained that he almost left the company a few years into his tenure because of a few self-serving supervisors and a copious amount of overtime hours. For a young professional, being told on Friday afternoon that you’d be working through the weekend was not an optimal situation. Despite these hardships, however, W.C. stuck it out and continued his career at Lockheed Martin.

Over the years, the writing departments became smaller, and the publishing industry became faster and more efficient. W.C. put proposal writing behind him and joined the Lockheed Martin/MEADS communications department, where he spent the rest of his career, rising through the ranks. W.C., who retired as Communications Manager in November 2017, credits the length of his tenure to his ability to stay relevant and useful. For example, W.C. started a daily newsletter for his coworkers and company. Yet, he didn’t stop there. He also made sure to keep it updated and valuable to the office over the years. Moves of initiative (like the newsletter) made sure that W.C. Wiese remained a valued and important member of the team, a point he stressed to his audience at the table. W.C. ended his presentation with questions from his listeners. Based on the reaction from the table, it’s safe to say that W.C. offered everyone valuable career lessons that go far beyond the college classroom. 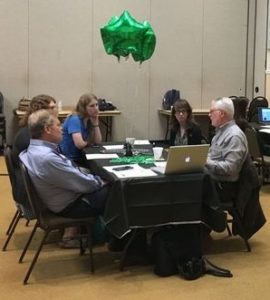